Everyone produces waste, and the Swedes are no different. It’s what they do with it that
is unusual. Sweden recycles and sorts its waste so efficiently that less than 1 percent ends
up in landfills. But perhaps even more interesting, and somewhat controversial, is that
Sweden burns about as much household waste as it recycles, over 2 million tons, and
converts this to energy. But even with this amount of domestic waste, the country’s 32
waste-to-energy (WTE) incineration plants can handle even more. And when Sweden
runs out of its own garbage, it offers a service to the rest of garbage-bloated Europe:
importing excess waste from other countries. 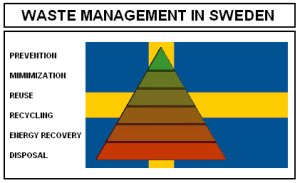 Less Than 1% Of Sweden’s Trash Ends Up In Landfills

While recycling has helped cut down on the amount of waste that ends up in landfills, a considerable amount still gets dumped in them all over the world each year. One country is showing us that it doesn’t have to be that way—Sweden.

To read the full article go to: www.iflscience.com/environment/less-1-swedens-trash-ends-landfills